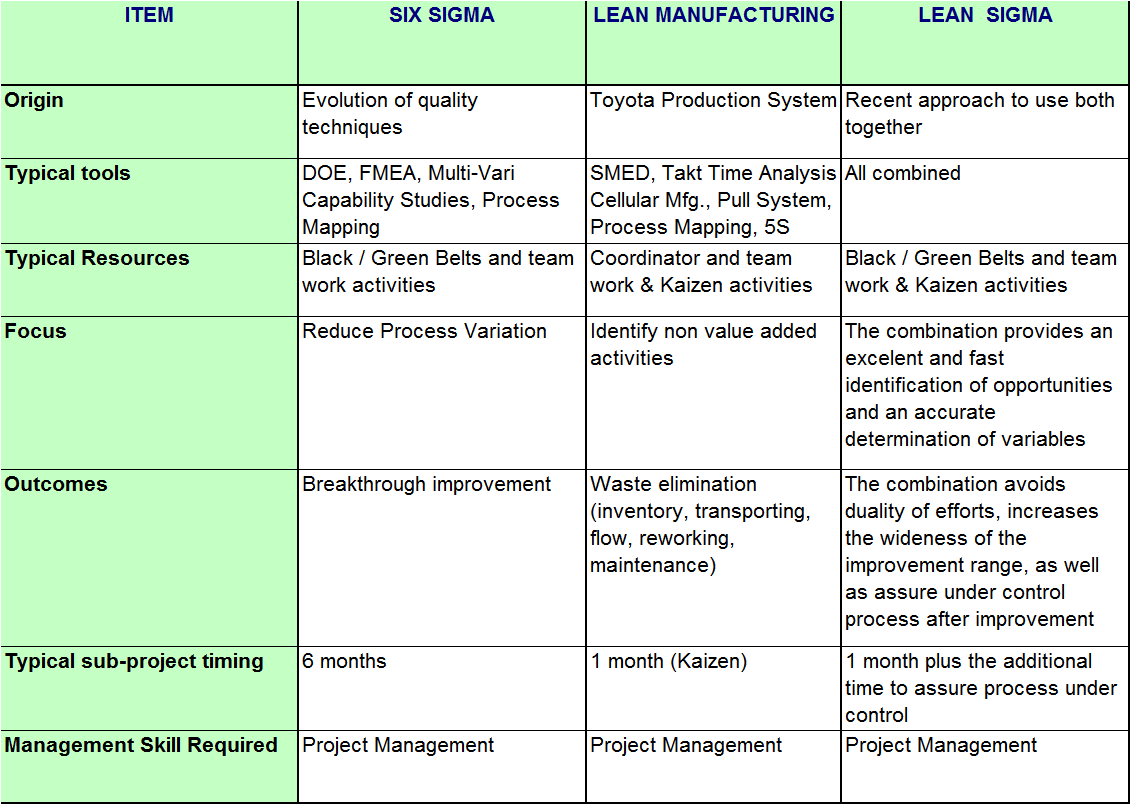 This lean six sigma overview isn't meant to be an exhaustive description but will give you a starting point.

In 1910 Charles Sorensen and Henry Ford created the first moving assembly line as a way of reducing wasted motion and handling complexity in automotive assembly. Without question, the Lean system pioneered by the Toyota Motor Company has a common beginning with these early 'work flow' improvements. However, this common heritage led to two very different manufacturing systems: mass production and Lean production.

The objective of mass production is to maximise economies of scale through high capital utilisation. At Ford, the emphasis on flow was limited almost exclusively to the final assembly line, while subassembly processes, suppliers and distribution operated on almost independent production schedules, resulting in large batch sizes and high inventory levels. Inventory at all points was accepted as a necessary buffer to survive schedule and output instability. Quality was inspected and projected into the system through mass inspection and inventory buffers. Capital was a solution to the relentless push for capacity.

Finally, production was driven from forecasts, pushing material through the plant in anticipation of actual customer demand. The mass production system flourished in the high growth, boom phase of the automotive industry and was widely copied in other sectors.

The objective of Lean production is the elimination of waste through the efficient use of all resources. In 1945 the president of Toyota Motor Company issued an edict to the company to catch up with American three years otherwise the automotive industry of Japan would not survive. At the time, labour productivity in Japanese factories was 1/10 that of US automotive manufacturers. Scarce capital and small, highly diverse ?island? market did not support large-scale, mass production. Finding a solution to the challenge led to a fundamentally different 'Lean Production' system, which ultimately triumphed over mass production during the 1973-4 oil crisis. At a time of global recession and slow growth, Toyota sustained profits and grew US market share while US companies lost on both counts.

The lean production system pioneered at Toyota created a new paradigm for excellence in manufacturing. This paradigm is founded on the belief that cost reduction is sometimes the only viable mechanism for a corporation to increase profit; price is not always an effective lever. Today, some organisations are fortunate enough to determine their selling price by first taking the product cost and adding on a sufficient profit margin:

A company can therefore increase profit by raising the price of its product. However, in a diverse marketplace, most companies do not have this advantage as consumers and market conditions largely determine price. In these markets, companies face the following equation:

This is often referred to as the 'cost-minus' principle because the company can only increase profit through cost reduction. Cost reduction in a manufacturing environment occurs through the elimination of waste. Waste can be defined as something for which the customer is not willing to pay; it is a non-value adding activity. The elimination of such activities shortens the lead time, so value is delivered to the customer faster and with less effort.

The goals of six sigma:

Six-Sigma Objectives Are Directly and Quantifiably Connected to the Objectives of the Business.

The many facets of Six Sigma:

So where did Six Sigma start and who else uses it?

Why is this NOT a past tense statement?

Because this is a continuous process

We Are Not Pioneers, We Can Learn From What Others Have Done and the mistakes they have made.

The biggest lesson we can learn from this Lean Six Sigma Overview, is that individually 'Lean' and 'Six Sigma' are very powerful tools - However, when they are used effectively, together, that power is exponentially increased.

Our video, 'Lean Six Sigma Overview' can be viewed below.