A Brief History of Lean Manufacturing

The history of lean manufacturing can be traced back almost 100 years in some guises. Here is an overview.

Taiichi Ohno is regarded as the founder of the Toyota Production System (TPS) which was developed from 1950 following an excursion to the Rouge Ford plant in the US by Eiji Toyoda, a young engineer who reported his findings on the Ford system back to Ohno.

In the English translation of his book ‘TPS – beyond large scale production’ Ohno (1988) describes how TPS evolved out of need, as the market place in post war Japan required small quantities of cars to be produced in many varieties. This was very different to the Ford principle of mass-producing the same Automobiles in large production runs.

Although TPS began in 1950, it was not until the 1973 oil crisis that other Japanese firms began to take notice, and since this time the system has been studied, copied and implemented across many industries.

Womack, Jones and Roos (1990) coined the phrase ‘Lean Manufacturing’ to describe TPS when they printed the results of a five-year study into the automotive industry in the book ‘The Machine That Changed The World’. This gives a pretty good insight into The History Of Lean Manufacturing

Even with the massive amount of research that has taken place into the Toyota Production System, fifty one years after it was born, Slack et al (2001, p481) still refer to Lean Manufacturing as a ‘radical departure from traditional operations practice’.

Ohno (1998) describes the most important objective of the TPS as increasing production efficiency through consistently and thoroughly eliminating waste.

Figure 1. indicates how TPS differs from traditional approaches to improve productivity through adding resources and illustrates the impact of waste elimination on production lead-time. 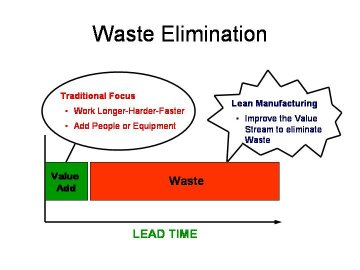 So what is waste?

Womack et al (2003) define waste as any activity that consumes resource but adds no value as specified by the customer.

In order for us to understand the waste within manufacturing activities Ohno (1988) broke waste up into 7 elements.

These elements are: Overproduction, Over-processing, Waiting, Transport, Inventory, Motion, and Defects and they are defined from the history of lean manufacturing below:

Producing things ahead of demand

Inability to move to the next processing step

Unnecessary movement of materials between processes

Inappropriate processing of parts, due to poor tool and or product design.

Unnecessary movement of people during the course of their work. 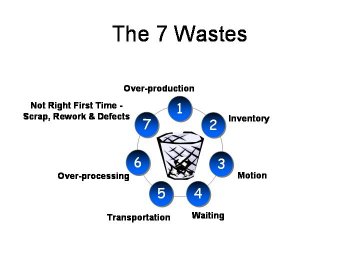 The make up of each of these elements is covered below

In general terms the key elements of Lean Manufacturing work together to continually improve production processes. Put simply, waste elimination is accomplished through Just In Time and Jidoka, maintained through Standardised work, and improved through Kaizen.

Producing what is needed, when it is needed, in exactly the amount needed. (Using pull systems (Kanban), continuous flow processing, and synchronising the production speed)

The ability of production to be stopped in the eventuality of a problem, either by the machines themselves or people. (Using ‘stop systems’, and error proofing).

Standardised procedures concentrating on the most efficient human movements and work sequence for each process.

In summary the principles of lean Manufacturing are to reduce waste through the application of a number of process improvement tools.

Flow production is based on the Just In Time methodologies that fall within a ‘Lean Manufacturing’ production system. Womack et al (2003) contend that the concept of making products flow is almost counterintuitive and difficult for many people to conceptualise let alone implement.

Flow means producing without (or with minimal) batches, waiting, or wasted motion, in other words flow means that each individual product keeps moving either in the literal sense or in the sense of being continuously worked on.

The concept of flow has origins that predate TPS.

Keniche Sekine (1990, pp3-4) former head of the TPS consulting group describes the situation when Ford discovered the benefit of moving the automobiles around:

Recognizing how bulky and heavy automobiles were, Ford initially thought it better to follow the first concept (keeping cars stationary).

However, one day while looking for ways to eliminate waste from assembly processes, Ford noticed the following:

 Waste in the scattered movement of workers

 Waste in searching for, comparing and finding objects

After noticing these types of waste, Ford though long and hard about how he could eliminate them.

Finally, he hit upon the idea of mounting cars on a row of cars that could be pulled along by a rope and winch.

Right away he issued the following instruction to his employees:

1. Set up a large winch and a large thick rope to pull the automobiles along during assembly.

2. Since the factory was about 80m long, divide the assembly line into 15 one hour processes. This would allow the rope to pull all of the automobiles to the next process once per hour.

3. Distribute the assembly parts to their corresponding processes before they are needed.

4. Assign three or four workers to each process and work out the balance of labour by observing the assembly line.”

The experiment proved a big success. Sekine (1990) reports that assembly time per vehicle was reduced from 13 hours to just 5 hours from following the preceding 4 steps.

Ford had established a simple methodology for creating production flow, and almost 100 years later these for steps are evident in conventional techniques used to create production flow in Lean Manufacturing.

These techniques are detailed below

Production flow is a worthy prize for any manufacturer and to achieve it a number of things need to be in place.

• A clear understanding of your customer requirement so that the production process can be organised to specifically achieve them.

• Production team with responsibility for adding value to the same product should be co-located, and move away from traditional production silos.

• Production equipment should be fit for purpose and well maintained to allow operation with minimal waste.

• Production processes should be standardised to ensure even, consistent paced work without production operators becoming overburdened, or operating in conditions of waste.

• Production employees should attempt to identify and eliminate all waste in production.

• Pull systems should be introduced to ensure that process only produces a good that the subsequent process needs.

• Visual management systems should be implemented so that production process abnormalities and the consequent countermeasure can be easily identified.

 Constant demand is required as flow systems are designed to achieve a specified output, if the output changes the lay out of the system will need to be changed in order to avoid the cost of inventory, or failure to meet customer requirements.

 Standardised tasks need to be present to ensure that process variability is minimised and the production line can meet customer demand with minimum levels of waste.

 Material inputs to the system must be on time and to the required quality, as disruption will cause the system to fail.

Flow allows the entire production process to be regulated by the natural laws of supply and demand in a Lean Manufacturing environment.

It works by customer demand stimulating the production of a stock-keeping unit.

The result is that the right parts and materials are produced at the right time and delivered exactly when they are required; in the exact amounts they are needed. Production is ‘pulled’ by the customer rather than being ‘pushed’ by the capabilities (or limitations) of the production system itself, as detailed in this History of Lean article.

Traditionally the physical manifestation of flow production process is the moving production line.

However using a technique called ‘line balancing’ we can get the benefits of a flow line in a fixed assembly position. Sekine (1992) terms fixed assembly manufacture ‘gypsy production’ as the product remains in one place whilst workers move around it.

Line balancing means adjusting the spread of work evenly between people to the rate of customer demand.

In summary, flow production methodologies are not new, but do require a number of things to be in place before they can be implemented within a Lean Manufacturing environment.

Reprinted with the kind permission of Barry Williams (MBA)