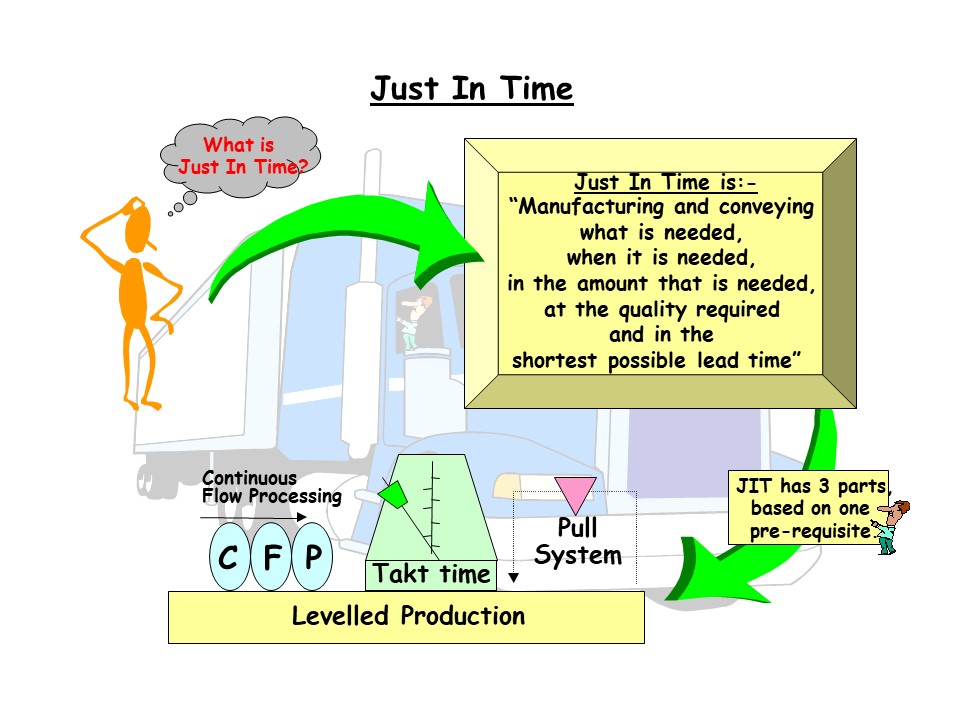 JIT is a management philosophy that strives to eliminate sources of manufacturing waste by producing the right part in the right place at the right time.

Waste results from any activity that adds cost without adding value, such as moving and storing.

JIT (also known as lean production or stockless production) should improve profits and return on investment by reducing inventory levels (increasing the inventory turnover rate), improving product quality, reducing production and delivery lead times, and reducing other costs (such as those associated with machine setup and equipment breakdown).

In a JIT system, underutilized (excess) capacity is used instead of buffer inventories to hedge against problems that may arise.

JIT applies primarily to repetitive manufacturing processes in which the same products and components are produced over and over again.

The general idea is to establish flow processes (even when the facility uses a jobbing or batch process layout) by linking work centers so that there is an even, balanced flow of materials throughout the entire production process, similar to that found in an assembly line.

To accomplish this, an attempt is made to reach the goals of driving all queues toward zero and achieving the ideal lot size of one unit.

1. Stabilize and level the MPS with uniform plant loading:

create a uniform load on all work centers through constant daily production (establish freeze windows to prevent changes in the production plan for some period of time) and mixed model assembly (produce roughly the same mix of products each day, using a repeating sequence if several products are produced on the same line).

2. Reduce or eliminate setup times: aim for single digit setup times (less than 10 minutes) or "one-touch" setup -- this can be done through better planning, process redesign, and product redesign.

production lead times can be reduced by moving work stations closer together, applying group technology and cellular manufacturing concepts, reducing queue length (reducing the number of jobs waiting to be processed at a given machine), and improving the coordination and cooperation between successive processes; delivery lead times can be reduced through close cooperation with suppliers, possibly by inducing suppliers to locate closer to the factory

workers should be trained to operate several machines, to perform maintenance tasks, and to perform quality inspections. In general, the attitude of respect for people leads to giving workers more responsibility for their own work.

7. Require supplier quality assurance and implement a zero defects quality program: errors leading to defective items must be eliminated, since there are no buffers of excess parts.

A quality at the source (jidoka) program must be implemented to give workers the personal responsibility for the quality of the work they do, and the authority to stop production when something goes wrong. Techniques such as "JIT lights" (to indicate line slowdowns or stoppages) and "tally boards" (to record and analyze causes of production stoppages and slowdowns to facilitate correcting them later) may be used.

use a control system such as a kanban (card) system to convey parts between work stations in small quantities (ideally, one unit at a time).

A kanban is a card that is attached to a storage and transport container. It identifies the part number and container capacity, along with other information.

There are two main types of kanban (some other variations are also used):

2. Conveyance Kanban (C-kanban): signals the need to deliver more parts to the next work center (also called a "move kanban" or a "withdrawal kanban")

The weakness of a push system (MRP) is that customer demand must be forecast and production lead times must be estimated.

Bad guesses (forecasts or estimates) result in excess inventory, and the longer the lead time, the more room for error.

The weakness of a pull system (kanban) is that following the JIT production philosophy is essential, especially concerning the elements of short setup times and small lot sizes.

1. no parts made unless P-kanban authorizes production

2. exactly one P-kanban and one C-kanban for each container (the number of containers per part number is a management decision)

3. only standard containers are used, and they are always filled with the prescribed (small) quantity

1. deliberately remove buffer inventory (and/or workers) by removing kanban from the system

3. take corrective action to eliminate the cause of the problems