The concept behind the this lean manufacturing tool is to reduce costs in high volume production lines.

One-way to do this is to smooth and balance material flows by means of controlled inventories.

Translated as signal this allows an organization to reduce production lead-time, which in turn reduces the amount of inventory required.

In order to determine optimum system designs, research often uses simulation to determine the number of Kbn's and to study various aspects of pull systems, see for example [1,2].

A heuristic design method has been designed by Ettl and Markus [3], which can be used to evaluate a System’s performance by using alternative network partitions and allocations of Kan-ban's.

The heuristic design method integrates analytical techniques and a general-purpose genetic algorithm in order to model a System.

The heuristic method provides us with a useful procedure for evaluating the impact of design alternatives and can therefore serve as a decision support tool for managers to use when planning a large-scale manufacturing system.

By this point you may be asking, "What is a Kan-ban?”

A Kan-ban is a card containing all the information required to be done on a product at each stage along its path to completion and which parts are needed at subsequent processes.

These cards are used to control work-in-progress (W.I.P.), production, and inventory flow. A Kan-ban System allows a company to use Just-In-Time (J.I.T) Production and Ordering Systems that allow them to minimize their inventories while still satisfying customer demands.

A Kan-ban System consists of a set of these cards, with one being allocated for each part being manufactured, that travel between preceding and subsequent processes. 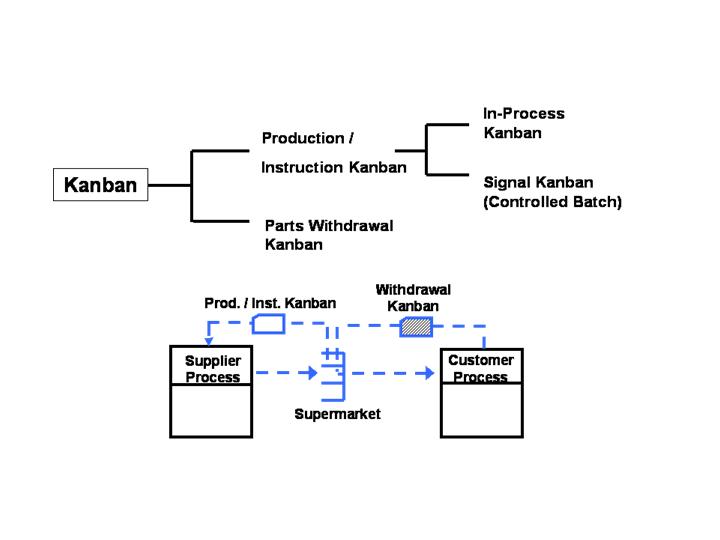 The Kanban System was developed (more than 20 years ago), by Mr. Taiichi Ohno, a vice president of Toyota, to achieve objectives that include [4]:

o facilitate the methods of achieving and assuring quality control

o design work sites according to human dignity, mutual trust and support, and allowing workers to reach their maximum potential.

Dramatic changes away from high product throughput and high capacity loads towards the new idea of lower production times and work-in-progress have lead to the idea of incorporating Kan-ban Systems in manufacturing industries (most notably in automotive industries).

These systems are most commonly used to implement the pull-type control in production systems with aims at reducing costs by minimizing the W.I.P. inventory.

This allows an organization the ability to adapt to changes in demand, and therefore production more quickly.

A pull-type production line is a sequence of production stages performing various process steps on parts where each stage consists of several workstations in tandem. The flow of parts through the overall facility is controlled by a combined push/pull control policy, which is established by the Kan-bans.

A push-type policy is used for producing parts within each individual production stage.

However, parts are pulled between the production stages in accordance with the rate at which parts are being consumed by the downstream stages.

The two most common types of Kan-bans used today are:

The main function of a withdrawal Kan-ban is to pass the authorization for the movement of parts from one stage to another.

The withdrawal Kanban then travels back to the preceding process to get parts thus creating the cycle.

o name of the next process

o location of the next process

o name of the preceding process

o location of the preceding process

The withdrawal Kan-ban layout can be designed many ways in order to display this information.

The primary function of the production Kan-ban is to release an order to the preceding stage to build the lot size indicated on the card.

The production Kan-ban card should have the following information :

o materials required as inputs at the preceding stage

o parts required as inputs at the preceding stage

The first two pieces of information are not required on the withdrawal Kan-ban as it’s only used for communicating the authorization of movement of parts between work stations.

Each production stage consists of one or more workstations and each has an unlimited local buffer for storing unfinished parts.

In a production stage i, there are Ki kan-bans and Ni work stations.

In order for a part to enter into production stage i, it must first acquire a free kan-ban (withdrawal kanban), Ki .

Once the part has entered the work station, it receives a new production kan-ban which remains attached to the part while until all work steps associated with the kan-ban card have been completed.

Once the part has completed the stage, the production kan-ban is removed once a withdrawal kan-ban becomes available.

The part is then moved to the output buffer where is awaits a new kan-ban to move pull it along to the next production stage (i + 1).

The kan-ban that was associated with the finished part is removed as soon as the part has been withdrawn by the next stage downstream.

The newly unattached kan-ban is then returned to the input buffer where it serves as a pull signal for the upstream stage (i - 1).

The kan-ban system produces only one type of part and performs under the assumption that an unlimited supply and demand of raw materials and finished products exists.

As a result of this assumption, no input buffer is necessary for the initial stage while no output buffer is required at the final stage.

For a kan-ban system to operate at its maximum efficiency, it is best to use pre-determined lot sizes for the production of all parts.

This allows you to minimize the setup and production costs as much as possible in this type of system.

Kan-ban is a essentially a tool that can be used to manage a work place effectively.

As a result of its importance in the work place, six rules (or preconditions) have been developed to govern the operation of a kan-ban system.

They are as follows :

1. no withdrawal of parts without a kan-ban

2. the subsequent process comes to withdraw only what is needed

3. do not send the defective part to the subsequent process

4. the preceding process should produce only the exact quantity of parts withdrawn by the subsequent process (ensures minimum inventory)

These rules are quite self-explanatory. For more information, refer to the reference indicated.

Other types of Kanbans

We also found three other types of kan-bans that exist for special circumstances only.

They are discussed briefly as follows:

2. Emergency kan-ban - used to replace defective parts and other uncertainties such as machine failures or changes in production volumes

3. Through kan-ban - used when adjacent work centers are located close to each other. It combines production and withdrawal kan-bans for both stages onto one, through, kan-ban

There are many advantages to using the JIT philosophy.

The best known form of pull-control is our kan-ban control.

Kan-ban is a simple-to-operate control system, which offers the opportunity to delegate routine material transactions on the shop floor.

A number of attractive qualities contribute to the growing popularity of kan-ban control.

Kanban is simple (mechanically) and relatively inexpensive to implement and operate.

Simply determining the quantity and location of kan-bans controls the amount of inventory.

It is a distributed control system, where complex system behaviour is controlled by simple local rules.

Visual controls provide a direct form of communication and make clear what must be done by managers, supervisors, and operators.

Perhaps the most attractive aspect of kanban, and the one that often makes it difficult to implement, is its ‘requirement for, and facilitation of, environmental improvement.’

This supports the saying that in order to eliminate waste, you must find it first.

The tighter coupling between processes creates a dependence, which is lacking in many push environments and forces awareness to problems.

Despite many sources of attractiveness, kan-ban control is not without its drawbacks.

Kan-ban is often cited as being applicable only in certain environments.

Issues of kanbans appropriateness in a particular production system revolve around general operating characteristics as well as environmental conditions.

The general operating characteristics required can be summarized as the repetitive manufacturing of discrete units in large volumes which can be held relatively steady over a period of time.

It is stated that kan-ban is difficult, or impossible to use when there are:

Even in spite of these problems, kanban will be the system many companies will and should use in the near future.

Even in trying to establish an effective kan-ban, one must consider availability of relevant system information.

To get a full understanding of this tool try the Kan-ban Training Pack, which includes Kan-ban Simulations - Simply click on the link below